Sex is a normal human function that can involve the expression of love and emotional feelings, and does provide a means for reproduction. Sexual intercourse, however, is not without potential harmful or unintended consequences. Two major potential health consequences of sexual intercourse are unintentional pregnancy and sexually transmitted diseases (STDs), including HIV infection.

Sexually transmitted infections are caused by:

Most common types of STIs, their common symptoms, diagnosis and treatment are:

Symptoms: white or flesh coloured bumps around genital area that may be itchy.
Diagnosed by: visible to the eye.
Treatment: medical removal of the warts.

Symptoms: sores around genital area or mouth that are painful, itchy or tingle.
Diagnosed by: physical examination, genital or oral swab.
Treatment: antiviral drugs if the infection doesn’t clear on its own.

Relationship between STI and HIV

The relationship between HIV and other STI is complex because it is both biological and behavioral. Some STIs, such as syphilis, herpes, genital ulcers, cause breaks in the lining of the genital tract. Those breaks can then become entry points for HIV.

For males:
Depending on your symptoms, the doctor or nurse may:

For females:
Depending on your symptoms, the doctor or nurse may:

Risk factors
Anyone who is sexually active risks exposure to a sexually transmitted infection to some degree. Factors that may increase that risk include:

•   Having unprotected sex. Vaginal or anal penetration by an infected partner who isn’t wearing a latex condom significantly increases the risk of getting an STI. Improper or inconsistent use of condoms can also increase your risk.
•   Oral sex may be less risky, but infections can still be transmitted without a latex condom or dental dam. Dental dams – thin, square pieces of rubber made with latex or silicone – prevent skin-to-skin contact.
•   Having sexual contact with multiple partners. The more people you have sexual contact with, the greater your risk. This is true for concurrent partners as well as monogamous consecutive relationships.
•   Previous history of STIs: Having one STI makes it much easier for another STI to take hold.
•   Anyone forced to have sexual intercourse or sexual activity: Dealing with rape or assault can be difficult, but it’s important to be seen as soon as possible. Screening, treatment and emotional support can be offered.
•   Abusing alcohol or using recreational drugs: Substance abuse can inhibit your judgment, making you more willing to participate in risky behaviors.
•   Injecting drugs: Needle sharing spreads many serious infections, including HIV, hepatitis B and hepatitis C.
•   Being young: Half of STIs occur in people between the ages of 15 and 24.

•   Make sure your partner(s) has been tested and treated for STIs
•   Avoid sexual contact if you or your partners have symptoms of an STI, have been exposed to an STI, or are being treated for an STI.
•   Discuss using protection, such as condoms, dental dam barriers, and lubricant.
•   Alcohol, and some prescription and illegal drugs can interfere with your ability to have a conversation and make decisions to have safer sex.

•   HIV Testing Isn’t Automatic!
•   HIV and other STIs testing shouldn’t take place without your consent
•   HIV testing involves pre-test counselling and then a blood test. Your doctor won’t automatically test for HIV when you get a routine blood test.

These harmful consequences can be dramatically reduced through effective prevention programs and by openly confronting these problems on a national level. More so those exposed to STIs, like young girls and women, must be well informed to know how to prevent STIs, what symptoms is associated with the various types and expectations for treatment. This is what CWIDI intend to achieve with this blog post.

Popular posts from this blog

JANUARY 2019 “STORIES OF ADVOCACY” ON ADVANCING THE SEXUAL AND REPRODUCTIVE HEALTH NEEDS OF YOUNG PEOPLE IN GWAGWALADA, FCT, NIGERIA 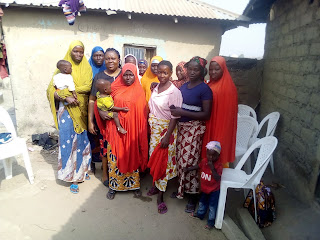 Staff of CWIDI with Female participants in the Focus Group Discussion @Pakio community   Bridget with Adolescent girls @  Momo Sabo communities during the FGD   Staff of CWIDI having FGD with members of Community Watch dog    Bridget with Mr James (persons with disability after the interview   Youth leaders participants @FGD  Paso Gwani community  CWIDI & partners educating women on FP and providing service  CWIDI & partners educating women on FP and providing service  In the month of January CWIDI continued to promote the sexual health and reproductive health and rights of young people in Gwagwalada Abuja through support from Women Deliver. Through WhatsApp and twitter messages CWIDI continued to educate young people on issues relating to SRHR such as family planning, gender equality, gender base violence, menstruation and hygiene, condom use, life skills and negotiation skills. The month under review recorded a major significant achievem
Read more

October 31, 2018
Another area women are globally discriminated against is gender-based stereotypes. According to the United Nations Office of the High Commissioner for Human Rights (UN OHCHR) , gender-based stereotype is defined as a generalised view or preconception about attributes or characteristics, or the roles that are or ought to be possessed by, or performed by women and men. It is said to be harmful when it limits the capacity of women or men to develop their personal abilities, pursue their professional careers and make choice about their lives. Even though a gender-stereotype can be positive and psychologically gratifying (for instance, women are merciful and home builders), it is mostly used to pull women down from fulfilling their potentials. Most often in Nigeria, gender stereotyping is negative. It is socially degrading. In mostly all the ethnic groups in the country, women are perceived as weak beings. In fact, among the Yoruba, women are believed to possess ‘seven (7) bones’
Read more